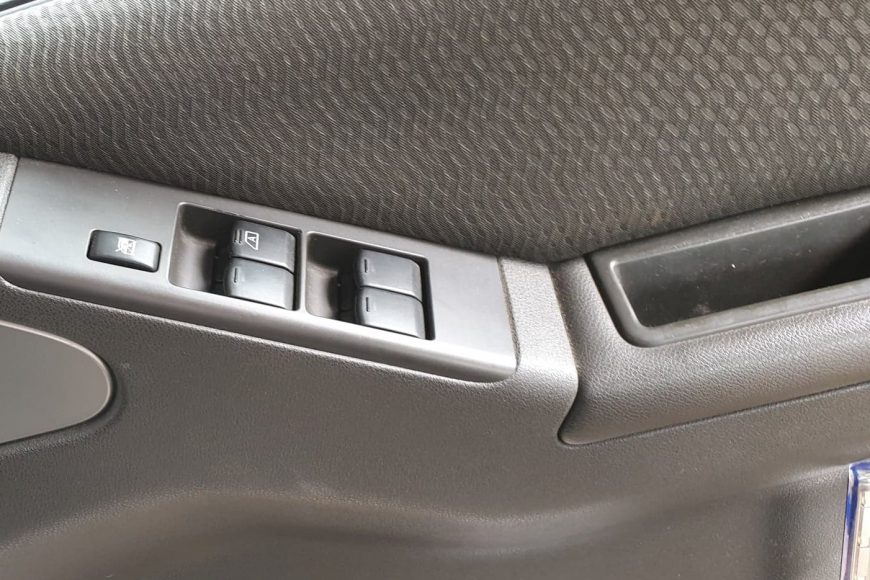 How does it work? Electric Windows

Electric windows are essentially the same as a manual window-winding mechanism, except that the manual winder handle is replaced by a motor.

The window lift on most cars uses a linkage to lift the window glass while keeping it level. A small electric motor is attached to a worm gear and several other spur gears to create a large gear reduction, giving it enough torque to lift and lower the window.

An important feature of power windows is that they cannot be forced open. Worm gears have a self-locking feature because of the angle of contact between the worm and the gear. The worm can spin the gear, but the gear cannot spin the worm — friction between the teeth causes the gears to bind preventing it from moving.

The linkage has a long arm or cable, which attaches to a bar that holds the bottom of the window. The end of the arm or cable can slide in a groove in the bar as the window rises. On the other end of the bar is a large plate that has gear teeth cut into and the motor turns a gear that engages these teeth.

The same linkage is often used on cars with manual windows but instead of a motor turning the gear the handle turns it.

On this system, the power is fed to the driver’s door. The power comes into the window-switch control panel on the door and is distributed to a contact in the centre of each of the four, or two (depending on the type of vehicle) window switches. Two contacts one on either side of the power contact are connected to the vehicle ground and to the motor. The power also runs through the lockout switch to a similar window switch on each of the other doors.

When the driver presses one of the switches, one of the two side contacts is disconnected from the ground and connected to the centre power contact, while the other one remains grounded. This provides power to the window motor. If the switch is pressed the other way, then power runs through the motor in the opposite direction.

Instead of the power for the motor going through the switches directly, the switches are connected to one of the many electronic modules in the car. Some cars have one in the driver’s door, as well as a central module called the body control unit.

Cars that have lots of controls on the door are more likely to have a setup like this. Some cars have the power-window, power-mirror, power-lock and even power-seat controls all on the door. This would be too many wires to try to run out of the door. Instead of trying to do that, the driver’s door module monitors all the switches. If you have any problems with your electric windows Townsville Mobile Mechanic can help. Call Sandro on 0400401171 or book online at www.townsvillemobilemechanic.com.au.